What is a Barcode Scanner

Today, technology plays a vital role in business operations across diverse sectors. In retail, the introduction of POS equipment has led to expedited and efficient sales that allow these stores to process customer orders quickly. One of the most commonly used POS products is the barcode scanner, a handheld device you can find in almost every retail store. But what is it exactly? And how do they scan the bars to enter data into the computer?

What is a Barcode Scanner?

Before we understand what a barcode scanner is, let’s take a look at what ‘bars’ mean in this context.

Before barcodes and barcode scanners were used, retailers had to manually enter the product name or code that was being sold to the customer. The advent of barcodes and scanners revolutionized retail businesses and improved their efficiency manifold.

These numbers or letters are nothing but an encryption of digits. The barcode doesn’t contain descriptive data about the item. When the salesperson scans the code, it’ll automatically be read and connected directly to the product data.

The data stored in the bars contained the vendor’s names, the product’s price and name, and additional data. The data needs to be stored in a computer, but it cannot read it from the bar itself. This is where a barcode scanner comes in.

Before scanners, the cashier had to manually enter and translate the code into a data format readable by the computer. Today, a barcode scanner or reader can directly read and send the information to a computer.

The barcode scanner is a handheld device that consists of a scanner, a decoder, and a cable that connects the decoder to a PC. 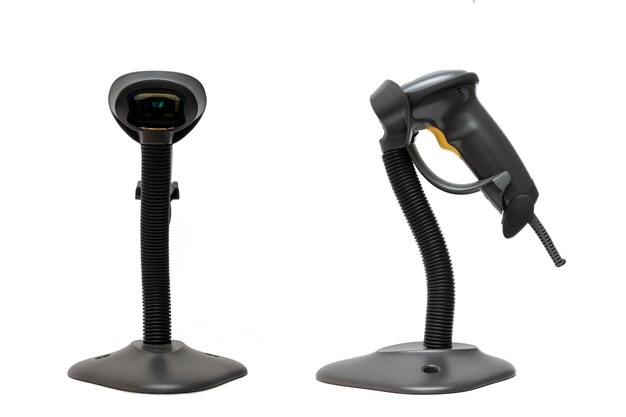 How Barcode Scanners Found Their Way Into Retail Stores?

Before barcode scanners were invented, grocery stores and chains had the need to keep track of their inventory. As their stores grew larger, the problem of keeping track of the items purchased and sold also got bigger. Retail and grocery chains were offered a glimmer of hope with the introduction of punch cards in 1890, but the huge costs of the card reader and its bulky size prevented small stores from having access to the equipment.

Soon after the end of the Second World War, a grocery chain in Philadelphia asked the Drexler Institute of Technology to devise a way to read product information during checkout.

Norman Woodward, a Drexler teacher, experimented with several days of collection methods during the next two years until he finally arrived at a solution. He invented the first barcode to read Morse code data (dots and dashes).

Taking inspiration from the science behind a movie sound system, Woodward devised a way to read this code. The movie sound system detected the light from the projector as it shined from the sides of the film with the help of a sensitive tube. This light was converted into sound by the system. Woodward took this idea further and invented the first barcode scanner, which converted this light into numbers.

The first barcode manufacturer was the Philadelphia Storage Battery Company, which purchased the patent for the device in 1962, beating fellow tech giant IBM. A few years later, it was sold to the Radio Corporation of America.

By the early 1970s, grocery stores started using barcode scanners, with one of the very first production scanning systems installed at a grocery store in Montreal, Canada.

How Does a Barcode Scanner Work?

Barcode scanners are used to scan symbols and convert bar codes into readable data and send it to a computer.

There’s also no complexity in how to use a barcode scanner. It’s a handheld device with a red laser that scans the barcode on a product’s packaging. These handle-shaped scanners are widely found across grocery stores and minimarkets to keep an inventory of the items sold and make the buying and selling process smooth and fast.

The scanner can read codes in the form of lines of thick boxes, which are then translated into a number and sent to a computer in electronic format.

Today, of course, the barcodes are more in the form of thick and thin lines displayed on every item’s packaging. The information stored in these barcodes includes the production code, identity number, and expiration date.

Barcodes are used widely today because they make it very easy to identify and read the code. Across supermarkets and grocery stores, the work of the cashier becomes much easier with a barcode scanner as they no longer need to translate each line in the barcode manually.

A barcode scanner not only makes your sales transaction more efficient and quick, but they’re also very reliable. These scanners have high precision and accuracy in processing data with zero chance of error. It’s also suitable to input data when there’s a large batch of products to be shipped or sold, unlike the traditional way of manually storing data for each item.

Barcode scanners come in a variety of models which differ in terms of reading and encoding the data. The different types of Barcode readers are as follows:

A small video camera with image processing capabilities that captures the image of a barcode.

Using laser beams as a light source and containing prismatic mirrors, these barcode scanners store information as the laser passes over the barcode.

The CCD barcode scanner uses multiple light sensors, which decide a barcode and send it to the computer in the form of voltage.

A pen-shaped device containing a photodiode at the tip, this kind of barcode reader generates waves depending on the width of the bars and spaces in the code. It then sends it to the decoder, and the translated data is sent to the computer for storage.

Explore the Best Range of Barcode Scanners at Master Distributors

Master Distributor is the leading distributor and supplier of POS hardware, including barcode scanners. Make your sales efficient and quick with our reliable barcode scanners that store all your data in one place and help in real-time reporting.

We have a range of barcode scanning devices from the top manufacturers, including Motorola, Zebra, Wasp, Unitech, and more. Apart from USB barcode scanners, you can also find wireless solutions that can be operated via Bluetooth at our online store.

Expedite your sales with accurate and reliable POS hardware solutions at Master Distributors.